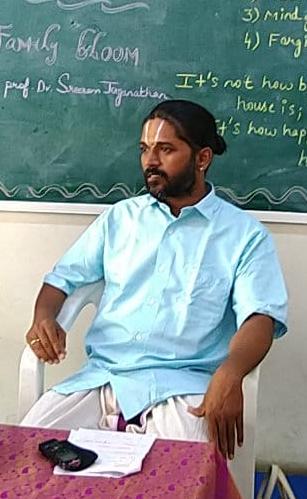 Dr.Sreeram Jaganathan has completed his MA, MPhil and PhD in Sanskrit [Thesis titled ‘Nature and Destiny of the Self in Advaita, Dvaita and Visistadvaita – a comparative study’]  from the University of Madras. He also has a BSc in Physics and MBA in Finance. Having worked with ICICI Bank and TCS between 1999 and 2009, he quit his corporate career and is involved in full time study of Sanskrit and Srivaishnava Sampradaya.

Dr. Sreeram has been teaching texts in Nyayashastra, Vedanta and other fields to post-graduate students at the University of Madras since many years. He also teaches English to students of Madurantakam Pathashala on a part time basis. He also maintains an informal school ‘Sree Ramanuja Vidyalaya’ at home, through which he teaches Stotras, Sanskrit and Sampradaya to several people.

Dr. Sreeram has undertaken Kalakshepam (traditional study) under the holy feet of Sri U.Ve. Dr.S.Padmanabhachariar, Professor and Head (Retd), Department of Sanskrit, University of Madras. He gives lectures and discourses on various scriptures and Srivaishnava texts. He is presently the Editor of the monthly magazine Vainavan Kural (English).

Dr. Sreeram is also a gifted poet, and composes  slokas (poetry) in Sanskrit under the pen name Nakula, Sreeram and / or Mukunda Padmanabha Dasa. His collection of shlokas is named as Nakulasya Sughoshah. It includes stotras on Bhagavan and various acharyas, verses describing everyday experiences in a humorous way, and also hundreds of Prahelikaas (Riddles) in Sanskrit. His compositions can be read at http://nakulasya-sughosha.blogspot.com/?m=1

Click here to view the courses by the Teacher