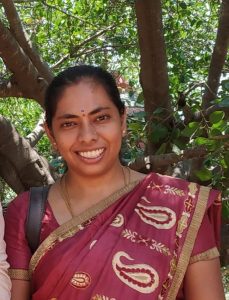 Dr. Sowmya Krishnapur has been learning and teaching Sanskrit since more than 20 years. She had her basic training in Sanskrit at the Geetha Govinda Samskrita Sangha, Bangalore, under the guidance of Maataa Vid. Ananthalakshmi Natarajan and Sri Venkatasubramanian. She learnt the Siddhanta Kaumudi from her guru, Vid. Smt. Vijayalakshmi M at Bangalore. She later completed her Acharya (Vyakarana) from the Rashtriya Sanskrit Sansthan, Sringeri, learning from scholars like Dr. Chandrashekhar Bhat, Dr. Narasimha Murthy and Dr. Krishnananta Padmanabha. Sowmya has obtained her Ph.D. (with SRF) in the area of Vyakarana under the guidance of Dr. P Narasimhan (Department of Sanskrit, University of Madras). Sowmya has also learnt the Paushpi prakriyaa under Dr. Pushpa Dikshit.

Sowmya has been teaching Samskrita at various levels since nearly twenty years. As part of the Geetha Govinda Samskrita Sangha, Bangalore, she has trained children for various simple Sanskrit exams of Surasaraswati Sabha and Bharatiya Vidya Bhavan. She has taught Vyakarana for eight years at the post-graduate level as part of teaching assistance during her Ph.D. programme. She has been teaching through vyoma-saṃskṛta-pāṭhaśālā for more than ten years, and conducted more than 20 popular courses through this portal.

Sowmya is currently the head of E-learning division at Vyoma Linguistic Labs Foundation. She has been a part of the organisation since its inception, and has contributed to the development of several multimedia tools for Sanskrit learning produced by the organisation.

She has presented research papers in various National and International conferences, and her articles have been published in several journals of repute.

Here is her complete Profile-

Courses by Dr. Sowmya Krishnapur available in our portal